On Jan. 10, the U.S. government began its sham trial of notorious terrorist Luis Posada Carriles in El Paso, Texas. Posada is being charged not as a mass murderer, but as a liar. The night before and the morning of the trial, activists organized a People’s Tribunal of Posada that exposed his true criminal history. Posada long functioned as a key player in the 50-year war of terrorism organized by the U.S. government and its agents in their attempt to overturn the Cuban Revolution. There was also a protest and rally at the El Paso Courthouse.

The sham character of the trial was made evident when the U.S. prosecutor labeled Posada a "remarkable man" who "can do anything he wants to the Cuban regime," but that he must stand trial for lying to a federal officer while seeking citizenship.

The Unitarian Universalist Community hall in El Paso was packed on Sunday night to listen to speakers including Ramsey Clark, former Attorney General of the United States, Mara Verheyden-Hilliard of the Partnership for Civil Justice Fund, Keith Bolender, author of a new book on terrorism against Cuba, Brian Becker, National Coordinator of the ANSWER Coalition, and Gloria La Riva of the National Committee to Free the Cuban Five. Speakers detailed how Posada was not acting alone, but as an agent of the U.S. government in attempting to carry out “regime change” in Cuba. 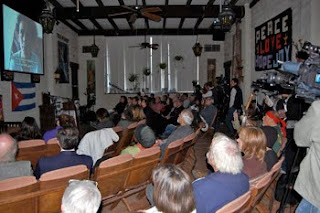 Perhaps the most moving part of the evening came when La Riva introduced a short video of interviews she had conducted with family members of the victims of Posada’s most heinous act: the 1976 mid-air bombing of Cubana Flight 455, which took the lives of 73 people. The audience paid rapt attention as several of the family members spoke about the impact that event had had on their lives. 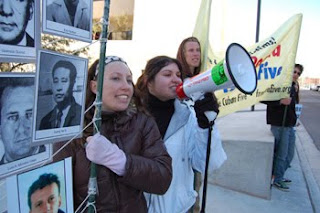 Bolender’s book, “Voices From the Other Side: An Oral History of Terrorism Against Cuba,” is filled with such interviews. In addition to the 1976 plane bombing, countless acts of terrorism against Cuba have taken the lives of 3,478 Cubans since 1959, and impacted the lives of thousands more. One of those is Livio di Celmo, whose brother Fabio was killed in a 1997 hotel bombing organized by Posada. Livio sent a letter demanding justice for his brother’s murder, which was read at the Tribunal.

The following morning, a spirited crowd lined the streets in front of the courthouse when Posada entered. They carried banners demanding his extradition and the freedom of the Cuban Five. The activists had also constructed a wall of photos of 74 of Posada’s victims (the 73 victims of the plane bombing and Fabio di Celmo). Speeches and chants in English and Spanish continued throughout the morning.

Video of the complete Tribunal, which was broadcast live on the Internet, as well as the protest rally, can be viewed at the website of the National Committee to Free the Cuban Five, www.freethefive.org. There, you can also read press coverage of the Tribunal, protest, and ongoing trial. Copies of Bolender’s book can also be purchased at the site's online store.
Posted by Los Angeles Anarcho Community at 4:25 PM

Los Angeles Anarcho Community
Local activism, Shows, and updates on world news & Updates from Anarcho Bands from all around.